The second phase of the 457 (and related) visa reforms took effect from Saturday 1 July 2017. Despite some advance warning on the broader amendments, there are nevertheless some unannounced, but important changes which will impact sponsors, nominators and visa applicants alike. In summary, the changes include:

Eligible occupations for the ENS Direct Entry (DE) stream are detailed in a newly compiled Subclass 186 occupation list, which includes the Short-term Skilled Occupations List (STSOL) and Medium and Long-term Strategic Skills List (MLTSSL).
Certain ‘Inapplicability conditions’ (aka Caveats) now apply against 68 occupations between the STSOL and MLTSOL on the new ENS list. Like the Caveats introduced into the 457 visa programme, these conditions import additional criteria based on salary, location, level of skill/experience, turnover and/or staffing levels of the nominating business. The introduction of these Inapplicability conditions was not formally announced before this abrupt change.
For the time being, eligible occupations for ENS Temporary Residence Transition (TRT) stream purposes are not dependent on any particular list/s, and will continue to be based on the occupation corresponding with the most recently approved subclass 457 nomination.
There appears to be no mechanism that would make a TRT stream occupation subject to any Caveat/s that would otherwise apply to the same occupation if it were nominated under the Direct Entry stream.

RSMS will remain unaffected by changes to the occupation lists. Eligible occupations for RSMS will be ANZSCO skill level 1, 2 and 3 occupations (reproduced in the new Legislative Instrument IMMI 17/058).

The much anticipated revisions to the 457 Short-term Skilled Occupation List (STSOL) and Medium and Long-term Strategic Skills List (MLTSSL) took effect from 1 July; notable changes include:

a) Addition of the following 12 occupations to the (457) MLTSSL supporting both a 4-year 457/TSS visa, and a pathway to employer nominated permanent residence:

b) Removal of Caveats to 8 occupations which were on the previous MLTSSL but ineligible for 457 or employer nominated permanent residence specifically because of the Caveats. The following occupations were subsequently made eligible for nomination under 457 ENS:

c) Reinstatement of the following 16 occupations to the457/TSS visa programme. Although these occupations are now back in contention, they only appear on the 2-year STSOL, and are therefore ineligible for employer nominated permanent residence after March 2018. Where
indicated, they are also subject to one or more Caveats. 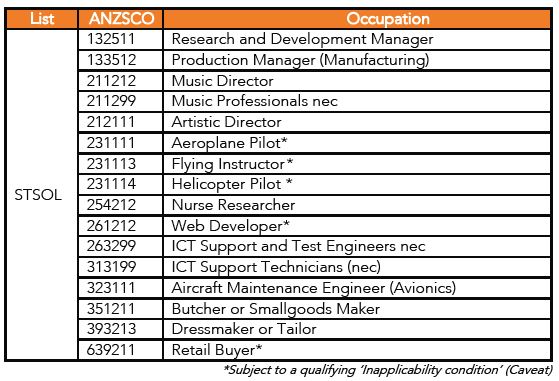 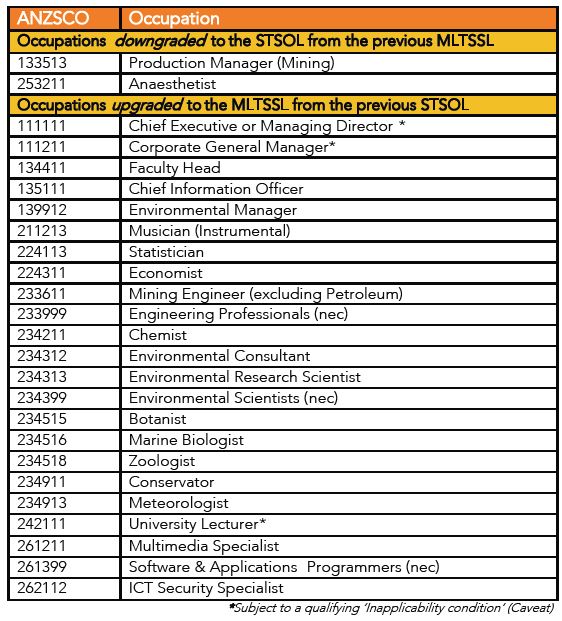 e) Removal of the following 9 occupations from inclusion under the 457/TSS and ENS (DE) programmes altogether: 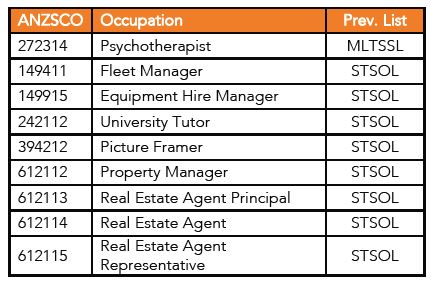 Primary applicants for ENS and RSMS visas made under the TRT stream who lodge applications on or after 1 July 2017 will require at least Competent English, as evidenced by an IELTS (or equivalent test) score of at least 6 in each component. The previous English language exemption for both ENS and RSMS visa applicants based on high earnings (>$180,001) has been removed. This will apply to all visa applications including those lodged before 1 July 2017 that have not been finalised. The English language exemption for applicants who have
completed at least five years of full-time study in a secondary and/or higher education institution where all of the tuition was delivered in English remains for the applications.

Unless exempted, primary applicants for 457 (and future TSS) visas who lodge applications on or after 1 July 2017 will require one of the following English test scores to satisfy the English language criterion:

The previous English language exemption threshold relating to high earnings (base salary of >$96,400) has been removed, save for nominees who are employed by an overseas business which is their sponsor or an associated entity of their sponsor.
The standard exemptions for certain passport holders, diplomats, and those with 5 years of English language education remain.

Prior to 1 July, exemptions from the need to obtain skill assessments under the ENS/RSMS (DE stream) existed, where the primary applicant’s earnings were above the top marginal tax threshold ($180,001). This has also been removed by Legislative Instrument IMMI 17/058.

Like the related English exemption, the changes will also apply to all visa applications including those lodged before 1 July 2017 that are yet to be finalised. For pipeline applications seeking the exemption, the only way to avoid a refusal is in the following circumstances:

Otherwise, there appears no remedy for an affected application save for withdrawing and re-lodging. This will not be of assistance to affected applicants who may have subsequently turned 45, for whom the consequences of the retrospective changes are particularly harsh.

From 1 July 2017, primary visa applicants for the ENS and RSMS Direct Entry (DE) stream must be under 45 years of age at the time of application. Age exemptions still exist for a limited class of persons including (in highly qualified circumstances): researchers, scientists, technical specialists, academics, New Zealand nationals and their 461 family members and medical practitioners.

The upper age limit for primary TRT stream applicants will remain at 50 years of age until March 2018 when the 45 year age limit will be universally imposed (unless specifically exempted). As previously reported, we are still unsure as to what age exemptions will be permitted after March 2018.

The ENS/RSMS nomination criteria found under Migration Regulations have been amended to require that ENS and RSMS TRT stream nominations provide evidence of ‘genuine need’ for the person to work in the nominated position.
This (and a related consequential change to nomination criteria for ENS Direct Entry), means that there is now a universal requirement to demonstrate “genuine need” for a paid employee across the two main streams of the ENS and RSMS programmes, irrespective of if (or for how long) the position may have been filled by a 457 visa holder nominee.

Two new Legislative Instruments have come into effect which revise the longstanding Training Benchmarks which must be met by standard business sponsors and ENS nominators. The DIBP have indicated that these represent incidental changes and/or simply clarify existing policy. This massively understates their significance, given that the following variations to the previous benchmarks appear to operate retrospectively for sponsors and nominators when demonstrating historical compliance with the training obligations:

Allowable Expenditure for Training Benchmark B

Variations to the expenditure that may count towards this benchmark include:

Expenditure that is not acceptable for Training Benchmark B

Variations to the expenditure that cannot count towards this benchmark include:

The definition of payroll has been clarified and essentially includes anything classified as wages under State/Territory payroll tax legislation, plus any payments to contractors and subcontractors, whether or not such payments are included for payroll tax purposes.
Although retrospective changes are allowable under law, it seems unreasonable to expect that sponsors who have adhered to their training obligations by providing training over preceding years based on the Training Benchmarks in force at that time, are now expected to show that they adhered to a different benchmark they could not have been aware of.

Once again, it appears harsh and unnecessary to have applied this change retrospectively, particularly when the Training Benchmarks will be replaced by the Skilling Australians Fund Levy in approximately 8 months’ time.

Recent changes have allowed access to a broader category of businesses (including smaller enterprises) on one of the following bases: 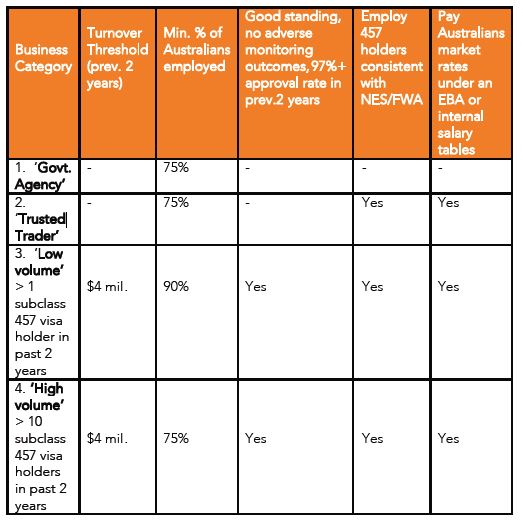 There have been a range of additional minor changes bundled with phase 2 of the 457 visa reform package. These include the introduction of a mandatory formal skills assessment process for more trade-related occupations for applicants from certain countries, as well as mandatory police clearances for all 457 applications lodged on or after 1 July 2017. Fee increases for 457 visa-related application charges (and in most other visa categories) have also now come into effect, as have more generous refund provisions under the Migration Regulations.
Although there has been unprecedented legislative and policy activity across the immigration and citizenship portfolios in recent months, only changes which directly relate to employer sponsored migration have been dealt with here.
On a final note, the retrospective nature of the reform package continues to be a cause for concern in terms of the workability of a stable, effective and equitable employer sponsored visa programme. FCB Smart Visa will be making representations at the highest levels of government to ensure the adverse effects of retrospectivity are better managed as a function of policy, and where possible, appropriate transitional arrangements.
The complexity and scope of the changes, and the dynamic nature of the 457/ TSS and ENS RSMS visa programmes makes it essential for businesses and visa holders to get astute and timely advice surrounding their immigration requirements.
For more information, please contact FCB Smart Visa on (+612) 9922 5188 or: Alex Kaufman: akj@fcbgroup.com.au